How to create your custom windlight settings starting from a photo

Merry Christmas and Thank You!

How To Get Realism In Second Life

Speaking of Clarissa’s photographic style, she loves (male and female) close-ups. In the shot, Clary investigates “the intimacy” of the avatar, his mood, his overall mood.
Giving life to a close-up in which, the real person behind the avatar can find himself, is a non-trivial enterprise.
Those with a little experience of virtual worlds know well how there is a mysterious connection between the avatar and the person behind the avatar itself.
The moods, emotions, and feelings are transmitted to the avatar, influencing in some way his appearance.
In a “virtual photo shoot,” even the emotions of a person can be transmitted and shared.

In the introductory notecard to herself, Clary writes:

Let me introduce myself to you: I was born and raised in Greece, I am married and currently living in Germany.
I initially studied Accountancy, however, designing has always been a fascination. So, I dropped Accountancy and started working for a newspaper and a magazine.

I joined Second Life in May 2007. At that time I had no idea what SL was and it took me some time to realize what was going on.
During these 10 years in SL, I made a lot of friends, I was a builder, a landscaper, a rental manager but what captured me most was exploring places, as well as personalities, AND of course photography.

In 2010 I left SL for a period of 4 years and returned after my RL move to Germany. One of the reasons for my return to SL was me missing the expression of design and creativity.
Since my return to SL, I’m making close ups. I love to turn my camera in all directions when I do a shooting, usually, I make over 50 snaps, even though in the end I will be happy with just the first one. I am a perfectionist and my challenge is to put feelings and emotions into an SL face.

I do not have a specific style when I edit a photo.
Let me explain my ‘working method’: I open a photo in Photoshop and just click click click, go back delete, click until my eyes are satisfied with the result. If you ask me how I did this… my answer will be I have no idea, because I never remember the way I edited.

Over the last 7 months, I started making poses as well. My brand is called CKEY Poses.

Faces….there are many, but only one represents us.
It is an amazing thing how a face can put so many emotions in your head. I personally believe that making close ups is one of the most difficult arts in photography, both in Real and Second Life, because you have to combine a strong image with the right feelings and emotions it will evoke to the viewers of this image.

Somewhere on the Internet I found the following quote, which I wanna share with you:

‘Japanese say that we have 3 faces.
The First face, you show to the world
The Second face you show to your close friends and family
The Third face you will never show to anyone. It is the most true reflection of who you really are’

I would like to thank all the persons who’s photos are shown here on the walls of Nitroglobus for their patience when posing for me.
Love you all girls and guys.

To the visitors: I hope you will enjoy this exhibition.

Here are all the useful references to explore the photography of this excellent Greek artist. 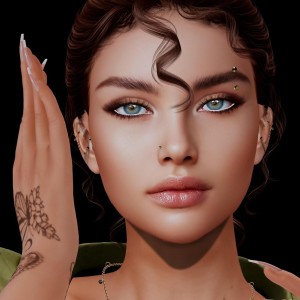 How to create your custom windlight settings starting from a photo

Merry Christmas and Thank You!

How To Get Realism In Second Life