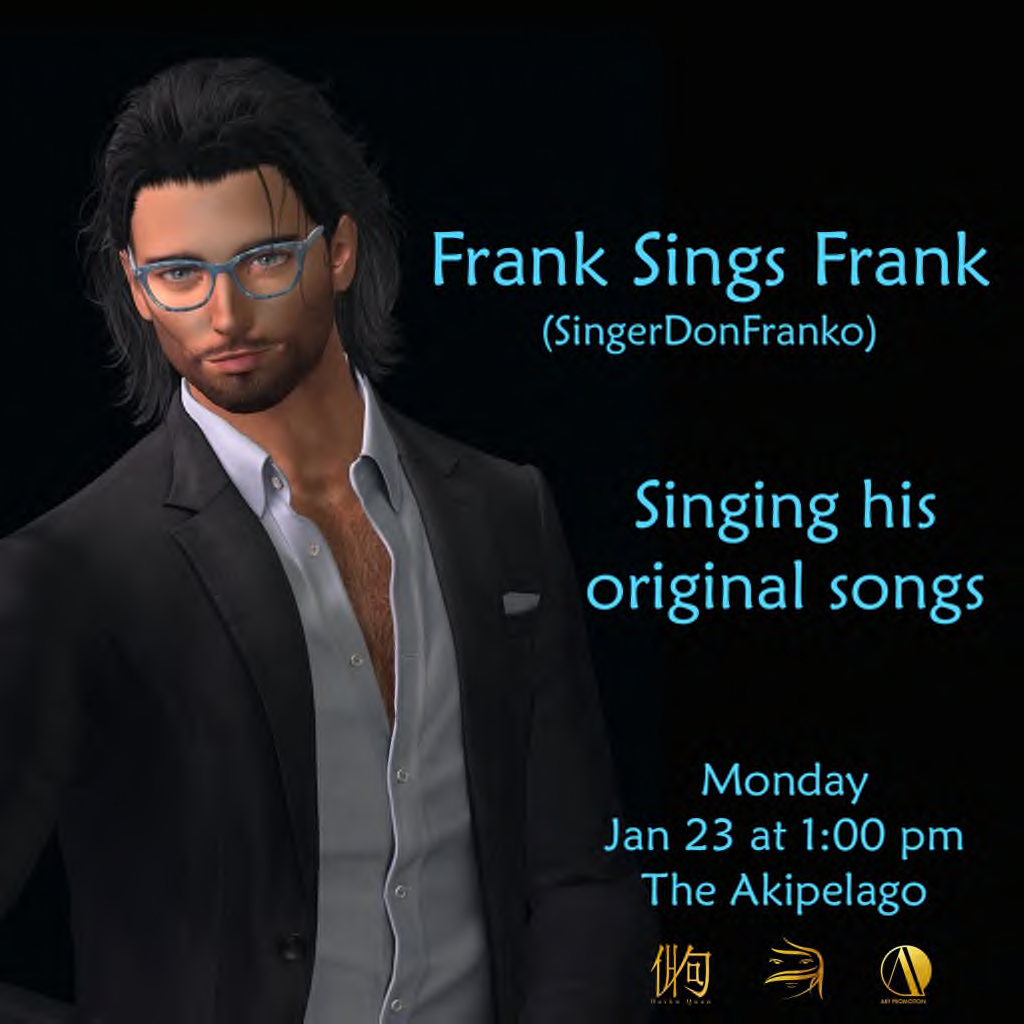 In this special event, Frank will sing and play an hour of songs he has written himself.

We have heard a few of these in his regular concerts, and they are as enjoyable as all his songs sung in his uniquely elegant voice.

But these also offer a glimpse into some of his personal thoughts about life.

You can’t ask for more than that.

Frank would describe himself as follows:
I’m an experienced (live and studio), well-trained singer of Swing, Jazz, RnB, Country, Rock/Pop, Musical,…. I am also a singer/songwriter with many songs, also inspired by Second Life experiences and stories. Songs that bridge the gap between the virtual and the real world.

Many of the songs I accompany on my piano. For the rest, I use the best available backing tracks where I mostly play along to.
But would that really appeal to you? ..mmhh…
Wouldn’t it be much better if, for example, an independent journalist wrote something about an artist without him (the artist) even knowing it? This is what happened with Frank and here is an excerpt from it:

The Teleporter, 2020-11-03
“Frank (SingerDonFranko) is the latest addition to the list of most talented and entertaining artists in Second Life.

He is an outstanding artist in so many ways. He is, ‘natural’ one would like to add, and loves to reach out for people all over the globe to bring his vision and perception of music to everyone who is ready and open for it. His voice and interpretation of the songs is unparalleled in Second Life. He not only sings live but also plays live on his piano which he affectionately calls “Peggy”.

He sings and plays the old Sinatra jazz classics like noone else as well as his own compositions, amiably introduced and mixed with personal stories and insights. His repertoire is so impressively large that it is almost impossible not to be enchanted at some time and somehow then. It is impossible to escape from his charme. Luckily, we’d say, because if there is ever a weakness with DonFranko, then that his concerts almost never end in time (as long as no other artist is singing right after him). When he’s in his flow and the audience in the right mood, then the old saying is true: no hour strikes the lucky one.”

Here is an example of feedback he received recently after one of his shows: “Thank you for the great evening! I really like your warm enveloping and seductive goosebump voice. But even more I like that I can hear your joy in the music and in us listeners…. :)) … merci!”

If you are interested in booking Frank, the best way is to write an email to Frank_SingerDonFranko@e-mail.de or send an IM in world, which will be forwarded to his email when he is offline.

Here are some sound samples and live show recordings to give you an idea of Frank’s musical range:

He usually plays a mix of all genres, but he is also open to more focused shows. No show is like the other. Only one thing they all have in common: they are all raw & uncut, with the best sound quality available, and he is always 100% live.

Singer and musician in various bands

2007 Entry into Second Life as a live performer 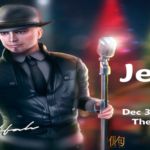 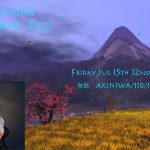 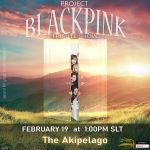 PROJECT BLACKPINK in The Akipelago Previous post The most popular virtual worlds among young people 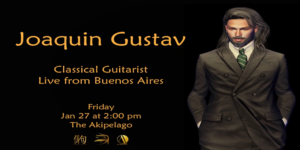 Next post Joaquin Gustav Live from Buenos Aires in The Akipelago